(8 Dec 2017) In collaboration and as an approved rescue partner, Delaware Valley Golden Retriever Rescue will be receiving dogs from South Korea rescued by Humane Society International (HSI). Animal rescuers from HSI have saved more than 170 dogs languishing on a squalid dog meat farm in South Korea. HSI is flying the dogs to shelters in the United States, Canada and the United Kingdom to receive care and rehabilitation. DVGRR was chosen by HSI because of our outstanding care, rehabilitation, training, and adoption programs. 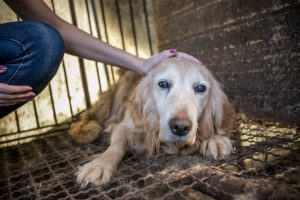 Nicole Jaworski, left, HSI Communications team, pets a dog at a dog meat farm in Namyangju, South Korea, on Wednesday, October 25, 2017. The operation is part of HSIs efforts to fight the dog meat trade throughout Asia. In South Korea, the campaign includes working to raise awareness among Koreans about the plight of meat dogs being no different from the animals more and more of them are keeping as pets. (Jean Chung/for HSI)

SEOUL (5 Dec 2017) by Humane Society International – Animal rescuers from Humane Society International have saved more than 170 dogs languishing on a squalid dog meat farm in South Korea, a mere two hour drive from where the country will host the 2018 Winter Olympics in 10 weeks’ time. The charity is flying the dogs to shelters in the United States, Canada and the United Kingdom to receive care and rehabilitation. Information on adoption will be available at a later date.

The dog meat farm in Namyangju is one of an estimated 17,000 dog farms in South Korea breeding more than 2.5 million dogs a year for human consumption. It is a grim, shocking and largely hidden side of South Korea that is in stark contrast to the colourful pomp and ceremony of the Olympic festivities, and one that a growing number of South Koreans believe has no place in their modern, progressive society.

The stated vision of the 23rd Winter Olympic Games is ‘new horizons’, explicitly appealing to the younger generation and aspiring to create a ‘cultural new horizon’ where traditional and world culture converge. HSI believes that with young Koreans increasingly rejecting dog eating, there has never been a better time to phase out the dog meat trade and usher in the ‘cultural new horizon’ of compassion. 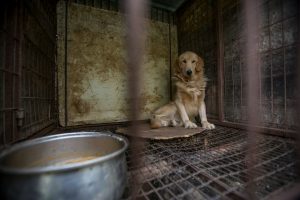 A Retriever mix dog is shown locked in a cage at a dog meat farm in Namyangju, South Korea, on Thursday, October 26, 2017. The operation is part of HSIs efforts to fight the dog meat trade throughout Asia. In South Korea, the campaign includes working to raise awareness among Koreans about the plight of meat dogs being no different from the animals more and more of them are keeping as pets. (Jean Chung/for HSI)

At the Namyangju farm, dogs including golden retrievers, spaniels, beagles, greyhounds as well as Korean jindos and mastiffs, were being kept in filthy and deprived conditions, spending their whole lives in rows of barren wire cages, exposed to the elements and with no veterinary care whatsoever. HSI found many of the dogs suffering from eye infections, skin disease, as well as painful leg and paw sores from endless days of standing and sitting on thin wire mesh. Their fate would have been to be killed by electrocution at the local market or slaughterhouse and made into a spicy soup called bosintang, but instead they’ve been saved by HSI as part of the charity’s campaign to see an end to the brutal dog meat trade.

Nara Kim, HSI’s South Korea dog meat campaigner, said: “As a Korean myself, I’m hugely proud to be able to save these beautiful dogs and stop their daily suffering. Most people in South Korea have no idea how atrocious these dog meat farms are and what physical and mental misery these animals go through. I feel privileged to be able to show these dogs that humans can be kind not just cruel, and to make them feel safe and loved for the first time in their lives. Eating dog is already a declining habit in South Korea, but if people could see the sorrow of these dogs and the disgusting unhygienic conditions in which they’re raised, I think even more people would stop eating it.”

HSI has been working on the ground in South Korea for the past three years; this is the tenth dog farm the charity has permanently closed, working in partnership with dog meat farmers keen to leave the trade. A combination of growing societal shame, increased difficulty in selling dogs as appetite for dog meat declines, and regret at the suffering of dogs, leads farmers to approach HSI for a practical ‘way out’. While for some very elderly dog farmers, HSI intervention has meant they can finally retire without the hard physical labour of dog farming and without having to sell their dogs for slaughter, others work with HSI to devise a business plan to transition them into alternative, humane livelihoods such as water delivery or blueberry farming. Mr Kim, who has been farming dogs for twenty years, plans to enter the construction business and to grow vegetables on his land. It’s a blueprint for change that HSI hopes the Korean government under President Moon Jae-In will adopt. 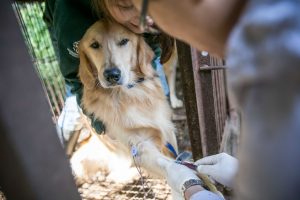 Kim Minsu, right, a veterinarian, and Nara Kim, Campaign Manager in South Korea of Humane Society International (HSI), collect the blood sample from Henry, a U.K. bound dog, at a dog meat farm in Namyangju, South Korea, on Friday, September 22, 2017. The operation is part of HSIs efforts to fight the dog meat trade throughout Asia. In South Korea, the campaign includes working to raise awareness among Koreans about the plight of meat dogs being no different from the animals more and more of them are keeping as pets. (Jean Chung/for HSI)

Farmer Kim said: “I originally started farming dogs because I heard it would make money, but now in South Korea even in the summer the trade has reduced by about one third. I also have a young child, and the dog farming business won’t look good for her because she really likes dogs. Working with HSI makes me feel great for the dogs, but at the same time I’m nervous to step into a new business. Before HSI, I wouldn’t talk to the dogs and I stopped myself from caring about them because it made it harder selling them to traders. But after I decided to work with HSI, I started to talk to these dog and told them to hang on in there. I told them they are going to have a much better life. And I mean it. I feel really great and happy for them.”

HSI’s President Kitty Block who joined the dog farm rescue effort, said: “I’ve worked in animal protection for many years but I can tell you, seeing these dog farms for myself has been one of the most emotionally confronting things I’ve ever done. As we count down to the Winter Games, it’s clear that it’s not sufficient for South Korea to temporarily hide the dog meat trade in the shadows when the world’s media shines its Olympics spotlight. What’s needed is a commitment to phase it out for good.”

HSI has saved a total of 1,222 dogs so far from South Korea’s dog meat trade, like gentle giant Clint the mastiff who recently starred in a PSA video with Criminal Minds actor Daniel Henney, and little Caspian who went from dog farm horror to Ambassadorial luxury when adopted by the British Ambassador to South Korea.

Take action! To say ‘no’ to South Korea’s dog meat trade, sign HSI’s petition in English or Korean – signatures will be submitted to the South Korean government.